Castles of the Rhine

Castles of the Rhine 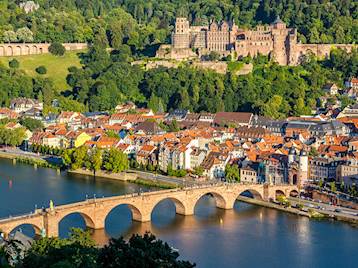 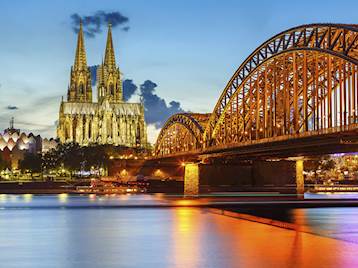 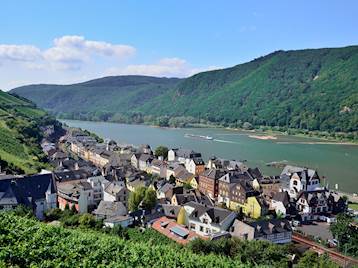 ‘Old Father Rhine’ is one of Europe’s most spellbinding rivers and has been a major transportation route since Roman times. The Middle Rhine is a UNESCO World Heritage Site of remarkable beauty and culture that was referred to by the Romantics as the ‘landscape of the soul’. The most famous stretch is dotted with ancient castles once owned by robber-barons that collected tolls from merchant vessels passing the river below. These fortresses stand sentry on lofty cliffs rising 400 feet above the waters. The natural tableau is augmented by storybook half-timbered villages folded beautifully between the rolling hills, carved chalk cliffs of startling whiteness and terraced vineyards that change colour with the seasons.

A cruise along the Rhine always includes a close encounter with the mystical Lorelei Rock. This imposing natural formation once created an eerie echoing murmur when it amplified the sound of a nearby waterfall – inspiring the legend that a beautiful siren, known as Lorelei, had made her lair amongst the rocks and led sailors to their watery doom with her singing. Close by lie the ruins of Burg Rheinfels – once the biggest castle on the Rhine.

Facing each other across a steep valley is Burg Katz and Burg Maus - the Cat and Mouse castles. Local folklore tells that Burg Maus was named by the counts of Katzenelnbogen, the owners of Burg Katz, who apparently had a healthy sense of humour. Amongst the many twists and turns along the course of the Middle Rhine, the most impressive is surely the huge looping ‘S’ bend at Boppard - guarded by the mighty Marksburg Castle. You get a real sense of the myths of this historic river as ruined castles appear on both sides of the Rhine on headland and precipice.

Rheinstein Castle, constructed in 1316, seems to spring from its rocky outcrop. Here there’s the chance to tour the medieval stronghold where there’s a drawbridge, knight’s hall and 500 year-old vines in the Burgunder Garden. Sitting imperiously on an island, Stolzenfels Castle has an impressive display of armory and weaponry. Excursions to other renowned castles can include the imposing Fortress Ehrenbreitstein at Koblenz and the 18th century gothic Würzburg Rezidenz.

A highlight of any cruise along the Rhine is the charming town of Rüdesheim with its bustling cafés and ivy-clad weinstubes. Active travellers can take a cable car ride to the great statue of Germania, marking the river’s southern exit from the gorge. Another captivating option is a visit to the unique Siegfried’s Mechanical Musical Instrument Museum to see the impressive collection of historical self-playing instruments. For more details about Rhine cruises speak to our experienced team on 0800 484 0370.