Cruise & Maritime proudly Announces Another new addition to their fleet

Cruise & Maritime proudly Announces Another new addition to their fleet 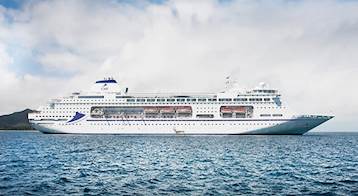 Cruise and Maritime Voyages latest ship, to be named Columbus, was the former Ocean Village / Aracdia.  A firm favorite with the UK cruise market !

Under CMV’s explorer theme, Columbus will be dedicated to the British cruise market homeporting year round from London Tilbury and providing a more traditional scenic British cruise experience.

At 63,786grt and with an impressive space ratio, she will carry about 1400 mainly British passengers accommodated in 775 cabins (including 150 singles) and will become the proud new flagship of the CMV ocean fleet operating alongside Magellan (1300pax), Marco Polo (800pax), Astor (600pax) and Astoria (550pax).

Columbus will also be targeted to the adult only (16yrs plus) market although in summer 2017 will be operating two selected August summer holiday sailings for all age groups. The ship was originally launched in 1989 and christened by Hollywood actress Audrey Hepburn on 23rd March.

Christian Verhounig, CEO and Chairman of CMV explained, “The successful introduction of Magellan in 2015 has encouraged our Group to accelerate their mid-term growth plans and the addition of Columbus to the fleet in 2017 is another important milestone in achieving our longer term growth objectives”.

He added, “The strategic development of the Group’s presence in the UK and wider international markets will increase our overall capacity to 125,000 passengers in 2017. We are proud of the CMV brand’s growing international recognition and remain confident in continuing to successfully build our business as a strong value based ‘independent’ alternative.”

Chris Coates, Commercial Director commented, “We are really pleased to welcome this fine ship to our fleet which we believe will be very well suited to our core British market who appreciate and value the many benefits of cruising on smaller to mid-sized more traditional vessels of this type. The introduction of Columbus and her past association and popularity with the British cruise market spanning 13 years, will increase 2017 UK bed night capacity by 25% to 95,000 passengers. Having already sold over 85% of capacity for 2016 and with 17,000 people turning 50 every week in the UK, we remain confident that Columbus will satisfy the growing demand for our product”.

The 2017 summer programme will go live ON SALE via the CMV website on Thursday 31st March 2016 and following the Easter holidays, a special 2017 launch edition preview brochure will be released on Thursday 7th April 2016.

Special introductory fares with enticing early booking deals to reward early bookers will be on offer plus a 25% single supplement deal with 150 dedicated single cabins being made available for the growing solos market. Attractive group deals offering further savings, free places and other benefits, will be available.