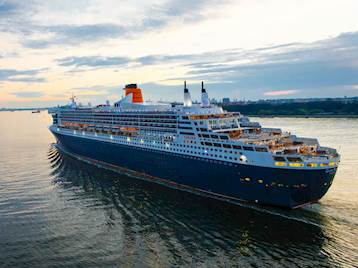 Cunard has announced that celebrated film director John Landis and master costume designer and historian Professor Deborah Nadoolman Landis will sail on Queen Mary 2 as part of the cruise line’s renowned Insights Programme on a transatlantic voyage from 18th to 25th August 2019. While sailing on the seven-night voyage from New York to Southampton, the pair will host Q&A sessions, lectures and a screening for guests to get a behind-the-scenes look into the world of motion pictures.

John Landis’s films include Animal House; The Blues Brothers; The Three Amigos; Coming to America; Trading Places; and An American Werewolf in London. Professor Deborah Nadoolman Landis is an Oscar-nominated costume designer and historian known for creating signature costumes for Indiana Jones in Raiders of the Lost Ark and the kingdom of Zumunda for Coming to America. She has written six books including ‘Hollywood Costume’, the catalogue of her 2012 blockbuster exhibition that she curated at the Victoria and Albert Museum, London.

“We are thrilled to welcome iconic film director John Landis and esteemed costume designer, Deborah Nadoolman Landis on board Queen Mary 2’s transatlantic crossing,” said Lee Powell, Vice-President Brand and Product, Cunard. “We are committed to bringing our guests exclusive enrichment experiences, and to continue our legacy of hosting the world’s best and brightest personalities.”

For almost 180 years Cunard has dominated travel across the North Atlantic Ocean. With their motto ‘speed, comfort and safety’, the line offered passengers not only some of the fastest sea crossings, but an incomparable way of life. Uniquely the word ‘Cunard’ evokes a legacy of pre-eminence that redefines the ethos of one of the great voyages of the world. Today Queen Mary 2 reigns supreme as the only liner offering scheduled transatlantic crossings.