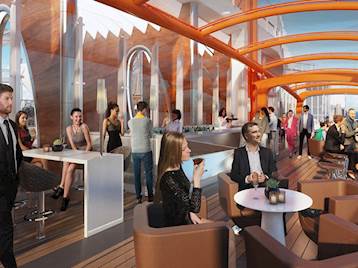 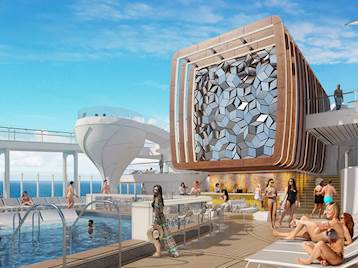 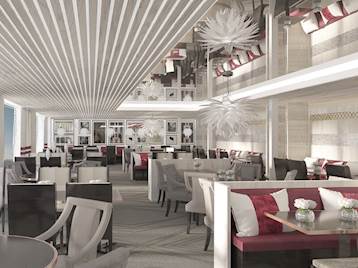 Celebrity Edge, Celebrity Cruises’ cutting-edge new ship, will make its debut in a few weeks time and the company has revealed the final chapter of the much hyped ship’s design by revealing new spaces created by top designers. “We couldn’t be happier that the excitement and anticipation around the launch of Celebrity Edge is growing each and every day,” said Lisa Lutoff-Perlo, Celebrity’s president and CEO. “We’re thrilled to give everyone another sneak peek of our transformational new ship with the unveiling of the Grand Plaza, the ever-evolving epicentre of Celebrity Edge.”

The Grand Plaza takes inspiration from the heyday of trans-Atlantic travel. At a time when ships were the preferred method of reaching the New World by glamorous high society, the focal hub of these vessels was often a ballroom, accented with dramatic staircases and ornate chandeliers. They were social places to meet, greet, dine, drink and dance. The Grand Plaza pays homage to these historic spaces and reinterprets them for the 21st century.

Spanning three decks at the heart of the ship, the Grand Plaza is crowned by a seven-ton chandelier, composed of five levels of 765 blades illuminated by dynamic LED strips that change colour from day to night. The Grand Plaza is also home to many of the ship’s new speciality restaurants, including Raw on 5 and Fine Cut Steakhouse on Deck 5; Le Grand Bistro and Café al Bacio on Deck 4; and the new Grand Plaza Café on Deck 3. At the heart of Deck 3, guests will find the next evolution of the Martini Bar, one of the most popular venues across Celebrity Cruises’ fleet.

In the morning guests can enjoy a cappuccino and a croissant at either of the cafés in the Grand Plaza. They can return to the Grand Plaza for afternoon tea or for a pre-dinner cocktail while enjoying pop-up performances. At nightfall, the energy transforms completely, and the space becomes the social heart of the ship with live music. In the Main Dining Atrium, the concept of a staircase has been turned it into a work of art. Hanging three storeys between the flights of stairs is yet another art installation known as the Pendulum, whose base moves ever so gently to the rhythms of the ocean to remind guests that they are indeed moving and connected to the sea.