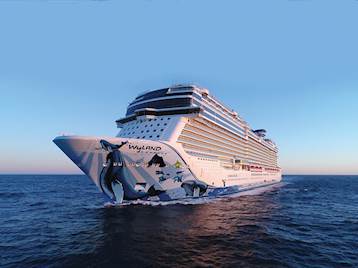 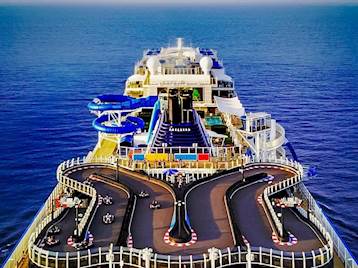 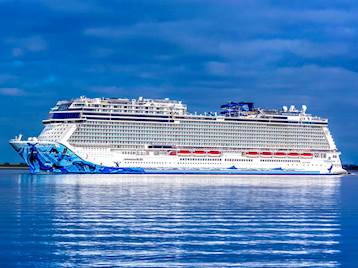 The hype surrounding the arrival of Norwegian Bliss has been gripping the cruise industry in recent weeks. On the same day that NCL took delivery of the 4,004-passenger ship in the port of Bremerhaven, Cruise Direct climbed on board for a two-day sailing to Southampton to find out what sets this, the largest ship in NCL’s 16 strong fleet, apart.

As I approached the modern cruise terminal all eyes were drawn to this 20 deck high titan towering above the surrounding flat countryside. The blue twisting waterslides atop the vessel were highlighted by the April sunshine. So too was the hull artwork, depicting a mother humpback whale and her calf by marine-life artist Wyland.

Norwegian Bliss, the third ship in the line’s Breakaway Plus class, is the first cruise vessel specifically designed with features and amenities for Alaska. But its signature attraction is sure to be the largest competitive racetrack at sea. The electric-car track on Decks 19 and 20 offers great views while negotiating twists and turns at speeds of up to 30 miles per hour.

Adrenalin-junkies will also love the Aqua Park which features two waterslides, including the high-speed Ocean Loops – a double loop chute that extends 11 feet over the side of the ship as well as the tandem Aqua Racer. There’s also a dedicated Kids’ Aqua Park of water cannons, tipping buckets and slides, not to mention the Splash Academy where there’s even jungle-themed nights. While the young ones are having fun, parents can head to the abandoned space station-themed open-air Laser Tag to compete with friends using state-of-the-art laser guns.

NCL is renowned for its entertainment and the two shows I watched didn’t disappoint. ‘Havana’ brings the sultry and seductive rhythms of Cuba in its 1950s heyday to life on stage with a large cast of seriously proficient dancers; it was a similar scene at Jersey Boys that features the music of Frankie Valli and the Four Seasons. However for me a trip to the Cavern Club was an undoubted highlight. Here a Beatles tribute band brought the hits of the Fab Four to life – to say the crowd went wild be would an understatement.

Norwegian Bliss boasts 27 dining options as well as 14 bars and lounges including a number of new speciality concepts such as a modern Texas barbecue eatery called Q that features live pop country music; the cruise line’s first Starbucks at sea, Coco’s - a chocolate and sweet treats shop; and the District Brew House where I enjoyed a variety of craft cocktails and beers.

In the three-deck private sanctum of The Haven at the top of the ship passengers are cosseted within an inch of their lives. For guests in these ultra-luxurious suites there’s a private restaurant; cocktail bar; Horizon Lounge as well as inner Courtyard with pool and an outside terrace on Deck 20 with amazing views.

NCL’s great deal - Premium All Inclusive – makes budgeting for a cruise holiday so much easier as it takes away any nagging doubts about extras that appear on your on-board account at the end of a cruise. For the cruise line that introduced Freestyle Cruising, it’s great to see an evolution of this concept that allows passengers to feel free to order what they want, where they want, when they want.

For more details of cruises aboard Norwegian Bliss in Alaska and the Caribbean as well as the benefits of Premium All Inclusive call 0800 484 0370.