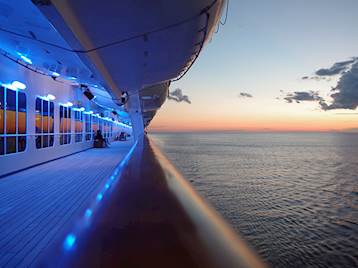 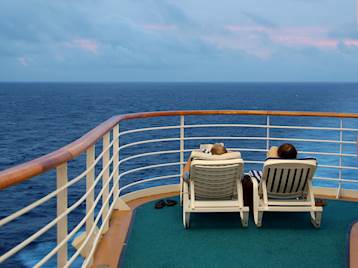 Bargain hunters who yearn for relaxing days at sea look forward to spring and autumn more than any other time of year. This is when repositioning cruises feature as an unsung element of cruise lines’ rosters. Though some ships spend the entire year on ‘milk-runs’ sailing the same itineraries, many up anchor to follow the sun. Few cruise vessels stay in Europe when thermometers drop, so between September and December there’s a veritable armada of ships crossing from Britain to the United States and Caribbean, calling at Iceland and the Canadian Maritimes en route. Likewise in spring many ships, having spent winter months in the Caribbean and South America, head back to Blighty via the Azores and the Iberian Peninsula.

These one-way voyages are often sold at a discount as they are not part of regular sailing schedules. To attract passengers, cruise lines may theme these voyages with topics ranging from Food & Wine, to Big Band Music. Enhanced enrichment programmes are also scheduled to make these voyages appealing to those who seek a more stimulating experience.

For over 175 years transatlantic travel has been the prerogative of Cunard Line. Before the advent of air travel, taking a sea-route was ‘the only way to cross’ and these famous ships made the North Atlantic their home. Indeed an oceanic crossing between the Old World and the New was seen by many as a ‘rite of passage’. So it is today for those who seek out the wide variety of repositioning cruises that are on offer between ports such as Southampton and Dover and American destinations like Boston, New York, Fort Lauderdale and Miami. The definable difference between a repositioning cruise and a line-voyage is the added advantage of ports of call.

Apart from catching up on a best-seller, there’s the chance to visit off-the-beaten track ports – the bragging rights of places such as Qaqortaq, Trois-Rivieres, or Horta are legion. These are blended with a procession of restful sea days as you cross vast expanse of ocean. The Atlantic Ocean can be tempestuous and ships have to navigate many nautical miles of open sea. Fortunately eastbound courses call for a southerly track – avoiding the storms, while westbound sailings hug the more tranquil waters along the Eastern Seaboard after calling at Greenland, Iceland and the Faeroes.

Repositioning cruises are, by their very nature, one-way voyages. Nearly all cruise companies include the outbound or return flight as part of the package – but it does mean a transatlantic flight of around seven hours. Both P&O Cruises and Fred Olsen Cruise Lines have convenient reposition voyages in October and December respectively and are perfect to banish winter blues. For more details speak to our experienced team on 0800 484 0370