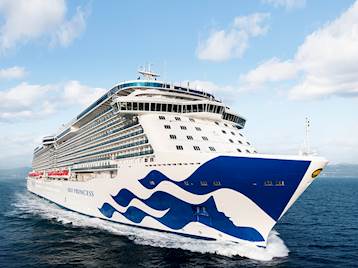 Princess Cruises has taken delivery of the 3,660-guest Sky Princess, the 18th ship to join its fleet. The 143,000-tonne vessel is the first purpose-built Princess MedallionClass ship and features an evolution of the design concept used for its three sister-ships: Royal Princess, Regal Princess and Majestic Princess. Sky Princess boasts a host of new features that will also be on another sister-ship - Enchanted Princess - which launches in Southampton in next June. Following her winter season in the Caribbean, Sky Princess will return to Europe next year, sailing from Copenhagen to the Baltic and Russia.

Jan Swartz, President of Princess Cruises, said: “As our new flagship in the fleet, Sky Princess represents the absolute best Princess Cruises has to offer our guests by connecting them with what matters most, unique destinations, loved ones, and new friends, while enjoying all the state-of the-art experiences in comfort and style.”

MedallionClass ships feature the complimentary OceanMedallion wearable device which is the same size as a 10p piece and delivers an entirely new level of service. Benefits include ‘Expedited Arrival’ – where guests who arrive at the terminal with travel documents uploaded to their profile enjoy an expedited check-in process. There’s also ‘Touchless Stateroom Entry’ which enables OceanMedallion to automatically unlock guest’s stateroom doors. Other facets of the device include ‘Family and Friends Locator’; and the ‘Interactive Voyage Timeline’ which is available on ship portals and via guests’ smart devices.

OceanMedallion’s On-Demand Services mean guests have the ability to order drinks, food and retail items such as suntan lotion and have them delivered directly anywhere onboard. There’s also the Interactive Game Play which is available on portals throughout the ship, ‘PlayOcean’ allows guests to take part in digital scavenger hunts, interactive games and create their own avatars, as well as turning their smart device into a game controller for interactive gaming on the ‘Movies Under The Stars’ top-deck screen.