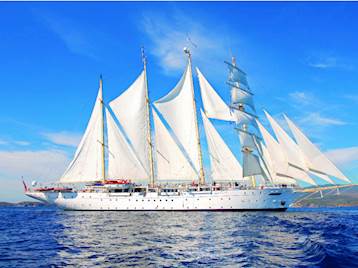 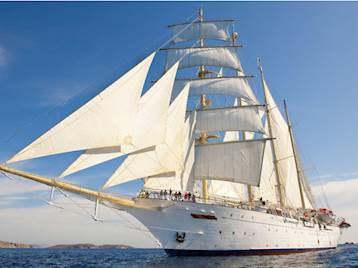 Marking ten years since the musical film classic ‘Mamma Mia’ was first screened, and the UK release of the sequel ‘Mamma Mia, Here We Go Again!’ Star Clippers has created a new Mamma Mia tall ship sailing itinerary which calls into the islands of Skiathos and Skopelos where the 2008 film was shot, including the opportunity to have a sunset marriage blessing on board.

Sailing on board the graceful, historically-styled tall ship Star Flyer, rigged with thousands of feet of sails and crewed by uniformed sailors, this unique cruise promises to be at least as romantic and exhilarating as the original film.

Among the film locations on Skopelos (called Kalokairi in ‘Mamma Mia, The Movie’), a peninsula near Glisteri was where Sophie leaves for her wedding and a cliff on the same peninsula was used for the cliff jumping scene with Sophie and her potential fathers, while the cast picnicked on a beach south of Agnondas, Skopelos.

Romantic settings on board Star Flyer include the chance to wake up in beautiful wood lined cabins and hear the sound of the lapping waves beneath the porthole, to enjoy a deck top sundowner on the open teak decks, or to lie hand in hand in the bowsprit net just a few feet above the open sea, often with dolphins swimming alongside. At night the ship’s majestic masts are lit with hundreds of bright white lights and during an evening stroll on the open decks there are plenty of romantic spots to pause and take in the twinkling lights of the nearby islands and the starlit sky.

Film fans will have three opportunities to sail to the original film locations, departing on 18 May, 29 June and 17 August 2019. During the production of the 2008 film, ‘Mamma Mia, The Movie’, most of the outdoor scenes were filmed on location at beaches and towns on the island of Skiathos. The Old Port on Skiathos is where the three fathers met for the first time, and the area around the St Nikolaos Bell Tower is where Sophie mailed her letters. During the 7-night cruise from Athens, Star Flyer visits Dikil (Turkey), Mirina, Limnos, Skiathos, Skopelos, Poros and back into Athens (Piraeus).

Honeymooners joining the sailings are greeted with champagne and flowers, while those renewing wedding vows can arrange a deck top sunset ceremony by the uniformed captain and crew. Who said romance was dead? If you want to be a super trouper and save money, money, money, call our experienced team on 0800 484 037