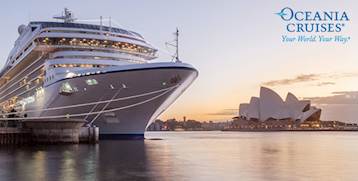 New research by award-winning cruise line Viking reveals that the changing lifestyles of the over 65s is inspiring an increase in multi-generational, all-adult family holidays. The research, carried out amongst 4,000 people in the UK, showed that almost a fifth (18%) of over 65s are regularly travelling with their adult children and grandchildren.

Four years ago, one in six trips taken were cited as multi-generational family holiday bookings. Today, that figure has doubled according to a recent TravelPulse report. Whilst grandparents are enjoying more active, longer retirements, and family group travel is an ideal way to spend quality time together, Viking’s research finds that the profound increase is fundamentally due to the new lifestyle habits of the over 65s who now have a more adventurous and youthful attitude to travel experiences. The research found that almost a quarter (23%) of those aged 65+ still feel that they are much younger than their years, meaning they have the energy to keep pace with their children and grandchildren on holiday.

What’s more, they credit spending time with their families and loved ones as a contributing factor to keeping them young. A significant 64% believe that spending time with family is essential to their wellbeing. A quiet weekend in the Dordogne or stay in Bournemouth no longer cuts it for the new generation of over 65s. Indeed, when asked where they would most like to visit were money no object, over half of those aged 65+ (51%) chose Australia and New Zealand as their most popular destination. Likewise, these antipodean hotspots came out tops for those aged 35-54 (31%) and aged 18–34 (22%).

Viking’s research revealed that in 2018 people are doing more adventurous things much later in life than previously. In fact the over 65s want to take on many of the same experiences as the younger generation. For example: 30% of the over 65s would like to take a helicopter flight, compared to 20% of those aged 35-64; 15% of the aged 65+ group would like to try canoeing, just 2% less than those in the younger age bracket (18%); while almost a fifth (18%) of both the older and younger generations would like to learn to ride a motorbike.

City breaks, foodie trips, and culturally-immersive experiences are not just the preserve of the Instagram generation, they are in fact growing in popularity amongst the over 65s.  When asked about how they liked to experience their holiday destinations, 67% of the over 65s said that they like to sample local food, with 58% of those aged 18 – 54 all saying the same. Refusing to hang up their party shoes, over a third (39%) of the over 65s said that they like to try local bars, only 3% fewer than those aged 18 – 34. Meeting local people, exploring local architecture and visiting museums also emerged as almost equally important to all the age groups. Whatever age you are, throw caution to the wind and get cruising. To discover all the options on the high seas call our experienced team on 0800 484 0370.