In July 2015 Crystal Cruises announced bold plans to expand their ocean cruise fleet as well as venturing into the river cruise scene for the first time. Crystal Cruises is synonymous with excellence, indeed they are the world’s most awarded luxury cruise line, having earned more ‘World’s Best’ accolades than any other cruise line, hotel, or resort in history.

Their original plan was to build four new vessels to cruise the rivers of Europe commencing in 2017. However four months after breaking the news of this new venture, Crystal Cruises acquired the largest river cruise vessel in Europe. Following an extensive makeover the newly designed Crystal Mozart commenced cruises on the Danube in July 2016.

Double the width of an average river vessel, Crystal Mozart is designed to fit into the wider locks of the Danube from Passau in Germany to Budapest in Hungary. Crystal Mozart has large window suites; deluxe suites; penthouse suites and two, two-bedroom Crystal Suites - the largest on any river vessels.

There are several dining options, these include the Waterside Restaurant which serves buffet-style breakfast and lunch as well as open-seating dinner where you can dine anytime between 7pm and 9pm – a true rarity in river cruising. Open only at lunchtime, Blue Bar and Grill serves comfort food as well as local specialities such as Sacher Wurtzl. Bistro Mozart is open from 9am until 9pm for delicious snacks and light meals. All provisions are sourced from local purveyors ensuring menu items take inspiration from regional cuisine. There’s also a 24-hour pantry and an extensive room service menu – another novel inclusion.

The epicentre of life on board is the beautifully-appointed Palm Court, while the Cove and Piano Bar are popular before and after dinner. There’s a wrap-around promenade, a luxurious spa and fitness centre with indoor pool, beauty salon as well as library and Connoisseur Club (for smokers). On the top Vista Deck there are oodles of comfy couches and an herb garden as well as a ‘pop-up’ bar which serves drinks during the day.

Each cruise has two complimentary ‘signature events’ which can include an art tour and classical concert at Vienna’s magnificent and historic Belvedere Palace, as well as a Michelin-starred lunch or dinner in Vienna or Budapest. With no fewer than 92 crew looking after 154 passengers we believe Crystal Mozart offers levels of service and experience that has redefined luxury on Europe’s rivers. 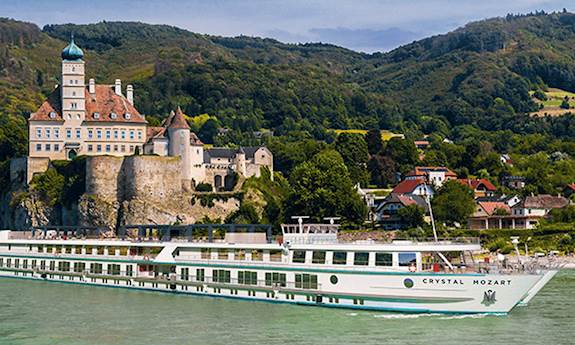 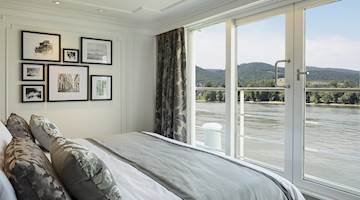 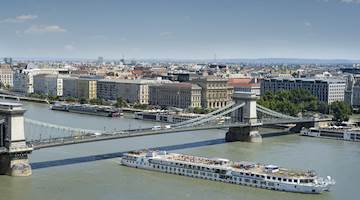