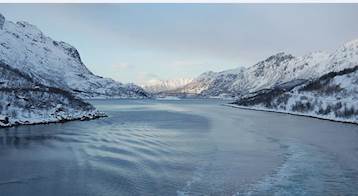 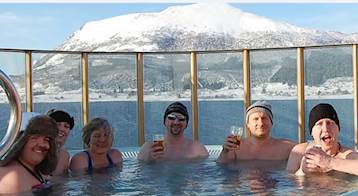 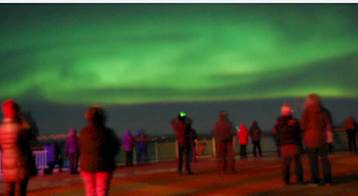 A Review of Hurtigruten – Tromso to Trondheim onboard MS Trollfjord, April 2013

Day 1 (18/03/2013)
We all met up at Gatwick airport nice and early and ready for our Norwegian Air flight to Tromso, via Oslo. I am not the best flyer so I was feeling a little sorry for who ever was unfortunate enough to be sitting next to me. However, we were off on a trip of a life time the plane was on time, and the excitement took over my worries.

Once we started to enter Norwegian airspace I could already see the snow on the ground and the magnificent landscape that awaited us on our four day cruise on MS Trollfjord.

On our arrival in Tromso which is sixty nine degrees North we were taken by coach to leave our luggage at our hotel. After a quick change into some warmer clothes we were off to meet some very excited Alaskan huskies. The transfer was around half an hour and it was nice to watch the sun set behind the mountains as we drove to our destination.

Arriving at something right out of a fairy tail, we changed into our snow gear and went on an hour long sledging trip through the forest. Only one word . . . AMAZING!!!

After the sledging, we all gathered in a Lavvo - a kind of Norwegian tent, where we had a meal of reindeer stew, hot chocolate and cake. After an evening I will never forget we were back on the coach to the hotel where we all met on the balcony to watch the MS Trollfjord arrive, this was just after Midnight so we still had time for a night cap before bed....

Day 2 (19/03/13)
After breakfast in the Saga Hall restaurant, we arrived in Harsted, where we disembarked the ship for out Excursion. “A Taste of Vesteralen”. This lasted for about four hours. We first stopped at a small church on the coast of the Fjords for a service – a little weird, I thought, but I went with it.

The highlight on this tour was the amazing scenery we got to witness. We had lunch on a small ferry with the amazing backdrop of the snow-covered mountains.

As the sun began to set on our second night, I started thinking about the Northern Lights as we had missed them on our first night. I was hoping, but never really thought we would get a chance to see them.....

We arrived back at the MS Trolifjord just in time to set sail for our next destination, We had a buffet lunch on board and then retreated to the bar to watch the magnificent Fjords pass by.

On arrival in Svolvaer we stepped outside into the fresh cold air to visit one of my favourite places ever...AN ICE BAR!! This was only a few minutes walk from the ship, and once inside, it was like being transported to Narnia. Ice sculptures lit up with all kinds of different lights and music which made you feel as if you were in a different world.

After a little tipple we were back on the ship for dinner, a set meal of fresh fish, which was lovely. Once we all got settled in the bar, watching the evening's entertainment, we heard a “Bing Bong” and it was what we had all been waiting for - “Ladies and gentlemen, if you would like to make your way to the top deck, the Northern Lights are out”.....Have never run so fast in snow boots!!!

This is the part I find hard to put into words....It was everything I ever imagined, and more. It started out like a massive green rainbow in the dead of night, covering as far as the eye could see. Then it got stronger and more vivid, and started to dance across the sky. I cant say more on this, as it was a magical experience, and something I will never forget and fee so luck to get the chance to witness.

Day 3 (20/03/13)
CROSSING THE ARTIC CIRCLE – We got up early for this, as we were due to cross the Arctic Circle at 9am, so after a quick breakfast, we were all on top again from the crossing ceremony. As part of the crossing it is tradition to give a shot of cod liver oil, which we had with a spoon (which we all got to keep) which says “I did the Arctic”. After the crossing we spent the day taking in the amazing scenery.

The good thing about MS Trolifjord is the floor to ceiling windows throughout the ship, so you never get too cold to witness the scenery. After a quick tour of the ship and a fun quiz in the Conference Centre, it was time to get a drink at the bar and sit and watch the world roll by.

We were on the late sitting for dinner tonight, half eight, so after an enjoyable day and watching an amazing sunset, it was time to get ready for dinner – tonight it was Steak!! The timing on was perfect as after we had all finished the meal and were sitting drinking the last of the wine - “Bing Bong”..... we all rushed up to the top deck again to see the start of another amazing show provided by the Aurora Borealis.

This time it stayed out almost all nigh long, so as people retreated in after an hour of watching the light show it was time for the evening's entertainment. Again we were treated to another really good night on board. People started trickling off to bed and I soon found myself the last one standing, I decided to go and sit on the top deck and watch the last of the Northern Lights, as tomorrow we were flying home.