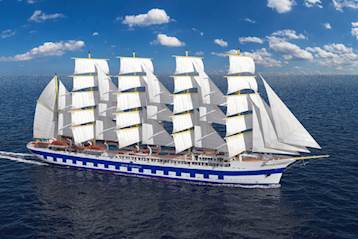 Whilst other vessels focus on offering guests a range of modern amenities, Star Clippers tall ships provide an insight into the world of traditional tall ship sailing. With itineraries in the Mediterranean, Caribbean, and Far East Asia, the three Star Clippers vessels operate cruises to smaller ports of call and untouched paradises that make each journey truly unique.

Earlier this week, to mark the line’s silver anniversary, Star Clippers unveiled their fourth and most impressive vessel to date – the Flying Clipper. This stunning new tall ship will measure 8,770 GRT and be powered by 35 sails, which will collectively total more than 6,350 square metres. The SPV Flying Clipper will be the world’s largest square rigger and the largest ship of its kind afloat today.

It has been built as a near replica of the France II, which was ordered in 1911 and built at the Chantiers et Ateliers de la Gironde shipyard, which is located on the banks of the river Garonne in Europe. The France II was the second largest commercial merchant sailing ship ever built and was originally built with two diesel engines, but these were later removed in 1919.

Although the Flying Clipper can draw resemblance to the France II, the new vessel will feature many modern amenities. She will feature three pools on the top deck – one of which will filter sunlight into the elegant dining room. This area will offer open-seating dining and a glass Dive bar for younger guests to enjoy.

Whilst docked, passengers will be able to take advantage of the water sports platform in the stern. Regular passengers with Star Clippers will be glad to know that popular additions such as the cosy library, bowsprit net and al fresco Tropical Bar will all feature on board the Flying Clipper.

Up to 300 guests will be able to relax and unwind in one of the many different categories of cabin, which will include 34 suites with balconies and four luxurious owner’s suites. Although like its sister ships, it will feature ecologically sound and high-tech engines, it will rely on its extensive range of sails wherever possible.

Details of itineraries are yet to be announced, however, the Flying Clipper is scheduled to enter service in late 2017.