A preview of Symphony of the Seas

A preview of Symphony of the Seas 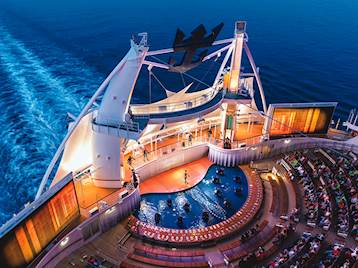 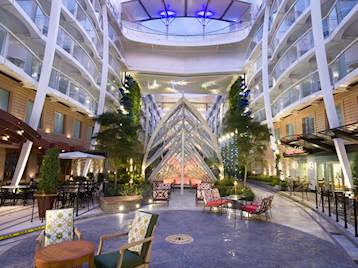 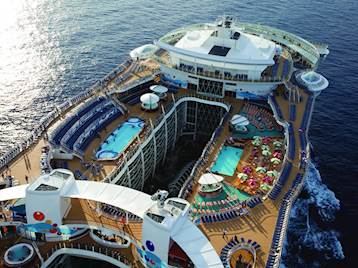 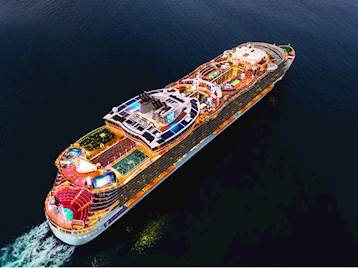 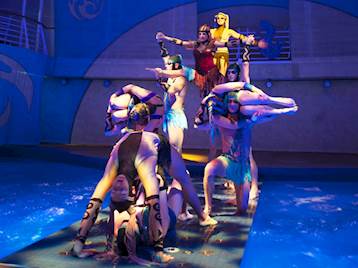 Royal Caribbean recently invited a select group for a preview tour of their new colossal ship and Cruise Direct’s own cruising guru was there. St Nazaire, at the estuary of the Loire River in western France, is a pretty bleak place in February but soaring above the town was the largest passenger ship in the world – the fourth in the company’s headline-grabbing ‘Oasis-Class’ of ships.

Symphony of the Seas towers 18 decks high, the hull is 1,188-ft long and with a displacement of around 228,081 gross registered tons this titan is 2,000 tons more than the current record holder of largest ship in the world – Royal Caribbean’s Harmony of the Seas. Accommodating 5,497 passengers, there are 2,747 staterooms in 41 categories. No surprise then that the price-tag is a sobering £959 million.

Just a couple of days before the all-important sea-trials commenced the invited guests donned hard hats and warm jackets as we clambered through the vast interiors of this blockbuster of a cruise ship.

In some areas cables and wires hung from the superstructure like an untangled spider’s web, in others white light from a pyrotechnic of welder’s torches was testimony to intensive toil. Exploring this labyrinth I encountered cable-strewn corridors leading to virtually complete staterooms where guests would soon be unpacking. At every turn the detailed plans of the ship’s designers were being consulted by fastidious workers who weren’t too busy to cast the odd wink in the direction of the younger ladies in our group.

I was taken aback at how advanced many of the public rooms were. Our first stop was Studio B – the ship’s ice skating rink – where some of the 12 champion-class skaters were practicing their routines for two new shows – ‘1977’ and ‘iSkate 2.0’. We were also given a demonstration of the cutting-edge technology that turns the ice into one of the world’s biggest video screens – where six laser projectors create a stunning video illusion on the surface of the ice. I could hardly believe my eyes when the ice was ‘flooded’ by waves of rushing water which appeared to freeze with a loud cracking sound.

Then it was on to the 1,370-seat Royal Theatre where ‘Hairspray’ – the popular Broadway musical – will return with a total refresh. There will also be a new show, ‘Flight’ - a satire on the evolution of air travel that ends with homage to the Wright Brothers monumental first flight.

The senior executives who were so proud of their new ‘baby’ then took us to the Boardwalk – one of seven ‘neighbourhoods’ on board all Oasis-Class ships. This vast space, overlooked by cabins on either side is the main amusement area for all the family. It is here that Symphony of the Seas has been given the edge over her sister-ships in the superlative stakes as there are 28 additional cabins allowing this fun zone to be expanded.

In addition to a carousel, there’s a new venue for family entertainment called Playmakers Sports Bar and Arcade which has 40 high-definition screens showing live sports throughout the day as well as 23 amusement park-style games. There’s also Sugar Beach a new ice cream and candy shop as well as the ever-popular Johnny Rockets Burger Bar. Running above this fun-filled deck is a zip-line just to add to the excitement.

The stern of the Boardwalk is the province of adrenalin-junkies who can experience the tallest slide at sea - Ultimate Abyss - a twin-coiled waterslide that drops 100ft in 13. In this action-packed part of the ship guests will also find the AquaTheatre where a new show - HiRO - elevates the meaning of heroics to new heights in a thrilling new spectacular show where a cast of 15 synchronised swimmers, acrobats, and high-divers enthralled the audience. There’s also the company’s signature FlowRider and Rock-Climbing Wall.

Among other parts of this headline-grabbing vessel that were on display to our select group was a two-deck high ‘ultimate family’ suite that comes in at a massive 980 sq ft. There’s a floor-to-ceiling Lego wall, an air hockey table, a wall-sized LED screen and a slide that connects the kids bedroom on the first floor to the ground floor. Despite its price-tag of around £30,000 for a family of eight for a week’s cruise it is already sold out for every cruise in 2018. We were also shown the top-of-the-range Loft Suites situated on the port, starboard, and aft side of the massive funnels.

We passed through another neighbourhood that has proved so popular on other Oasis-Class ships – Central Park. This was in the final stages of completion and in a few days time 12,000 plants will be installed adding a relaxed vibe to this centre of dining and shopping – new on Symphony of the Seas are outlets selling Cartier, Hublot and Omega watches and jewellery. The Park Café which has been such a popular option for breakfast and lunch has also been expanded from its previous incarnations. Foodies will happily call this neighbourhood ‘home’ as they’ll find the gourmet dining options of 150 Central Park; Vintages Wine Bar; Chops Grille and Jamie’s Italian.

High up on Deck 17 with great forward-facing views, we were shown the company’s first dedicated seafood restaurant – Hooked. This casual, speciality restaurant will serve fresh seafood that will be sourced from ports during the ship’s Mediterranean and Caribbean itineraries. One deck below I also saw the Solarium Bistro with offers spa-oriented cuisine as well as the Solarium itself where a pool has been added by popular demand.

As my tour came to a conclusion we walked through another neighbourhood – the Vitality at Sea Spa and Fitness Centre with its 25 treatment rooms offering a gamut of relaxing therapies and massages.

As a grand finale our group assembled in the Royal Promenade - the central ‘hub’ of the ship which is linked to Central Park by the Rising Tide Bar – a novel moving bar at sea which ascends and descends between Deck 5 and 8. Technophiles will be blown away by the fully robotic Bionic Bar designed and powered by the gurus at Makr Shakr. Traditionalists might prefer to order their favourite tipple at the Ale & Anchor Pub.

Cutting-edge technology will feature throughout Symphony of the Seas, including a check-in experience that will combine facial recognition, barcodes and beacons to make boarding fast and frictionless thereby eliminating queues and registering at a desk in the cruise terminal. Guests will check-in via the brand’s new mobile app and seamlessly upload their security ‘selfie’ to create their onboard account from the comfort of home.

This was a unique opportunity to get a ‘sneak-peek’ at what will certainly be the most talked about ship to arrive on the cruising scene this year. Symphony of the Seas sets sail in April on a summer-long series of cruises from Barcelona to ports including Palma, Marseilles, La Spezia (for Florence), Civitavecchia (for Rome), Naples and Valencia. The ship will spend the summer sailing out of this vibrant port before heading to Miami in November for a series of Eastern and Western Caribbean cruises.

symphony of the seas royal caribbean