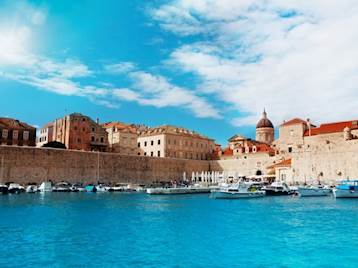 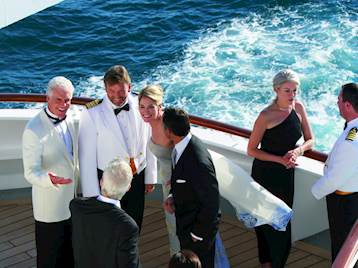 Think of Venice without the water and you’re getting close to Dubrovnik’s Old Town which is a UNESCO World Heritage site. It’s easy to be transported back in time at the Gothic Renaissance Sponza Palace and the Rector’s Palace - which has been converted into a museum of Croatian history. Another highlight is the Old Pharmacy which lies between the Franciscan Monastery and the Church of Our Saviour; here you can escape the relentless sun in a courtyard studded with orange trees, surrounded by cloisters. This is just one of the highlights of a yachting-style cruise along the 300-mile filigree coastline dotted with 1,185 islands set in turquoise waters that is the Dalmatian Riviera.

In the vibrant port of Split there’s the chance to explore the Diocletian Palace with its temples and grand promenades; or marvel at Poreč’s Byzantine mosaics. Korčula is a chocolate-box ensemble of orange-hued roofs and spires; it’s a similar picture in the impossibly quaint town of Rovinj where a maze of streets leads to the Church of St Euphemia.

Between lavender-growing fields and the azure Adriatic, Hvar’s medieval town not only exudes more than a whiff of Venice, it’s relentlessly gorgeous. Ostentatious super-yachts sit at anchor in front of fashionable hangout whose streets are paved with white marble and lined with chic restaurants and boutiques.

The 62-passenger Crystal Esprit is a resort-style, all-suite mega-yacht, offering gourmet cuisine and impeccable service. There are two 7-night sailings between Venice and Dubrovnik. The ‘Yachting Harbours of Croatia’ cruise overnights in Venice before sailing to Rovinj; Šibernik; Trogir; Vis; Hvar; Korčula and Dubrovnik. The ‘Dreaming of Dalmatia’ cruise from Dubrovnik heads to Kotor in Montenegro before an overnight stay in Split; Opatija and Piran are on the roster prior to an overnight stay in Venice.

Riviera Travel offer week-long ‘yachting’ experiences aboard three well-appointed vessels all of which accommodate no more than 40 passengers. MS Admiral and the newer MS Aquamarin sail from Split on contrasting itineraries. MV Corona heads into the Adriatic from Dubrovnik and calls at the Elaphite Islands; Mljet; Hvar; Split; Pucisa; Makarska; Omis; and Korčula.

Croatia has blossomed as one of Europe’s hottest new destinations, and the Dalmatian Coast has become one of the country’s most sought-after escapes. These Adriatic odysseys are as spirited as they are sublime. For more details about Dalmatian cruises where hidden gems are high on the agenda speak to our experienced team on 0800 484 0370.