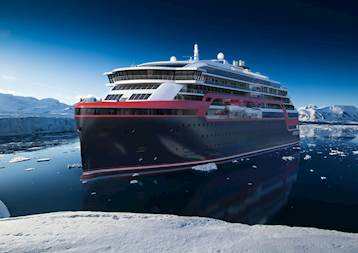 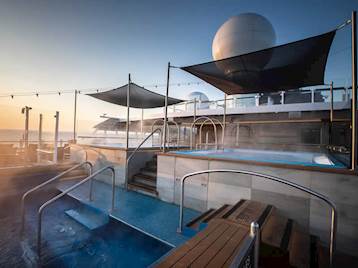 Hurtigruten’s hybrid powered expedition cruise ship MS Roald Amundsen has made history by being the first ship ever named in Antarctica. The world’s first hybrid powered cruise ship was officially named in spectacular surroundings in Chiriguano Bay on Brabant Island in Antarctica. “We could not think of a better location than Antarctica to name a truly unique ship like MS Roald Amundsen,” said Hurtigruten’s CEO Daniel Skjeldam.

Replacing the traditional bottle of champagne with a chunk of ice, Godmother and polar pioneer, Karin Strand revived a ritual invented by polar hero Roald Amundsen himself.   As Strand crushed the ice against the hybrid powered ship’s raked bow, she chose Amundsen’s own words, first used when he christened the polar ship Maud in 1917: “It is not my intention to dishonor the glorious grape, but already now you shall get the taste of your real environment. For the ice you have been built, in the ice you shall stay most of your life, and in the ice, you shall solve your tasks.”

Packed with groundbreaking green technology, MS Roald Amundsen uses large battery packs to support her low-emission engines, reducing CO2 emissions by more than 20 per cent compared to other cruise ships of the same size. In the summer of 2019, MS Roald Amundsen made history as the first cruise ship to sail on battery power and became the first hybrid powered ship to traverse the legendary Northwest Passage. After completing the current Antarctica season, MS Roald Amundsen will spend the summer of 2020 in Alaska. A second battery hybrid powered expedition cruise ship – MS Fridtjof Nansen – will join the growing Hurtigruten fleet next spring.