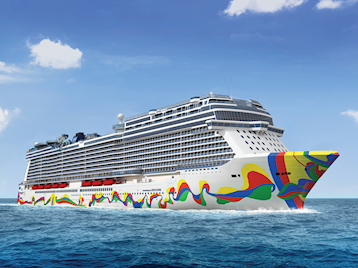 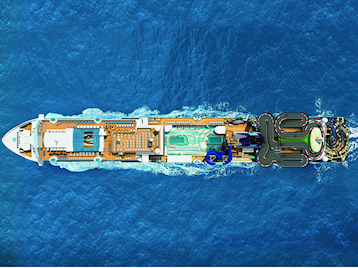 Norwegian Encore has been showcased to the UK’s travel trade and media and the verdict is a resounding thumbs up. At nearly 1,100 feet long, with a gross tonnage of almost 170,000 and a capacity of 3,998 guests, the ship will be christened by Grammy Award-winning artist Kelly Clarkson in Miami on 21 November.  Norwegian Encore will then commence seven-day voyages to the Eastern Caribbean from Miami. Sailings from New York to Bermuda plus Canada and New England commence on 22 April 2020; while voyages to the Western Caribbean from Miami begin on 12 December 2020. In 2021 Norwegian Encore will commence a series of sailings from Seattle to Alaska.

Taking the brand’s exclusive, stand-out attractions to the next level, Norwegian Encore features the world’s longest race track at sea at 1,100 feet with four high-speed curves extending up to 13 feet over the side of the ship; there’s also the largest outdoor laser tag arena at nearly 10,000 square feet with the addition of augmented reality elements; and new immersive escape room and interactive theatre experiences in the 10,000-square-foot Galaxy Pavilion.

The Tony Award-winning musical, ‘Kinky Boots’ headlines the world-class entertainment on board. The musical’s story is about an unlikely partnership between an entertainer and factory owner and features original songs by Cyndi Lauper. There is also ‘The Choir of Man’ which combines hi-energy music, dance, live percussion and foot stomping choreography by nine talented guys who perform everything from sing-along anthems to classic rock. Additional entertainment includes ‘Happy Hour Prohibition: The Musical’ which is an interactive cocktail and theatre show; as well as live musical performances from a Beatles cover band in the ever-popular Cavern Club - which transports audiences back to the legendary venue in Liverpool made famous by the Fab Four.

In addition to featuring many of the highly-rated restaurants and lounges that have made NCL’s Breakaway Plus class vessels one of the most innovative and successful concepts in the company’s history, Norwegian Encore debuts a new elevated Italian dining experience - Onda by Scarpetta - in collaboration with LDV Hospitality.

As part of a recent partnership with JUST Goods, Inc., Norwegian Encore is the first NCL ship to be plastic bottle free.  By 1 Jan 2020 Norwegian Cruise Line will be the first major cruise line to eliminate plastic bottles across its entire fleet, a significant effort towards providing guests with more sustainable options at sea.