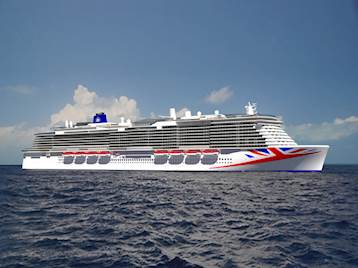 The wait is finally over. At 4pm on Thursday 24th May P&O Cruises revealed the name of their new 180,000-tonne vessel on Facebook. Back in July last year, the company announced there would be a competition in which the public, and devoted fans of the line, could vote for the name of the next ship in their fleet to be launched in May 2020.

A panel of four judges – including Darcey Bussell CBE – was set up to vet more than 30,000 suggestions for the new name which ranged from Canberra or Victoria to Boaty McBoatface and Shippy McShipface. Fortunately sanity prevailed and the choice of name was whittled down to just one – Iona.

Television personality and magician Stephen Mulhern travelled to the island of Iona in the Inner Hebrides for the reveal. He performed a card trick drawing the four of hearts which he turned over to show the name Iona written on the back. It was also announced that Gillian Crooks from Dundee had been chosen as the winner in the ‘name the ship’ competition.

Iona is an appropriate name for the new 5,200-passenger ship – the largest ever for a British cruise line. Proud of its Scottish roots, P&O can be traced back to 1822, when London-based ship merchant Brodie McGhie Willcox partnered with Scottish sailor Arthur Anderson in the hopes of creating a profitable business. Little did they know their venture would one day become arguably the most famous British cruise line.

Paul Ludlow, senior vice president at P&O Cruises, takes up the story, “We are an island nation and as Britain’s favourite cruise line it seems very fitting to highlight one of our most notable islands and celebrate the geographic diversity of the UK, especially as we can trace back our roots to the Scottish Isles. Iona played a significant part in shaping the history of our nation and we hope that with this very special name our new ship will shape the future of holidays at sea for generations.” He added, “Throughout the design process of Iona we were mindful that we were building a ship, not a hotel, and the intrinsic beauty of the sea, the vistas of the coastlines and ports of call should be at the fore and visible as much as possible from all areas of the ship.”

Cruises aboard the latest addition to the P&O Cruises’ fleet go on sale in September. If you like to be a ‘maiden voyager’ then call our cruise specialists now on 0800 484 0370