ITV's 'The Cruise' documentary 2nd series to be filmed this summer

ITV's 'The Cruise' documentary 2nd series to be filmed this summer 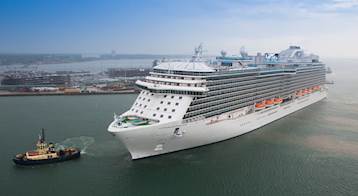 The second series of ITV's The Cruise documentary set onboard a Princess Cruises ship will be filmed in the Mediterranean this summer. The series which aired earlier this year revealed what life is like for crew and guests onboard a Princess cruise ship and attracted an average audience of 3.5 million viewers per episode.

The new series will be filmed onboard the 3,560-guest Royal Princess, the sister ship to Regal Princess which appeared in the first series. Royal Princess was launched in 2013 in Southampton by HRH, The Duchess of Cambridge. The new series will continue to give viewers insight into the day-to-day roles of the 1,400-strong crew, who hail from countries across the world. They will see how the team works together to keep the operations of the ship running smoothly including navigating the 141,000-tonne, 19-deck ship; preparing over 20,000 meals a day; and servicing 1,800 cabins. As well as catching up with known characters, viewers will also get to meet some new faces. ITV have announced that following on from the success of the first documentary, the new series will again be made by Wild Pictures, one of the UK’s leading factual documentary makers. Wild Pictures has a reputation for creating access-led films with high production values that focus on major organisations and human interest stories. The show is provisionally scheduled to air early next year.

Tony Roberts, Princess Cruises' vice president UK and Europe, said: "The first series of The Cruise was a great success for Princess and the cruise industry as a whole, so we are thrilled ITV has asked to come onboard again. We're eagerly anticipating following Royal Princess as she sails around the Mediterranean and watching the onboard stories unfold to an audience of millions."

Paul Hamann, executive producer at Wild Pictures, said: “Wild Pictures are delighted to be back onboard collaborating with Princess to make another series of The Cruise. Our team will be working hard filming over the summer to give our audience a tantalising taste of life aboard Royal Princess as it cruises round the Mediterranean.”

Viewers can join the conversation on Twitter via #thecruise

Cruise Direct’s 5 favourite reasons to cruise with Princess are :


We’re positive you'll get to see all of these on the show, however, give us a call or click here if you want to experience them first hand.